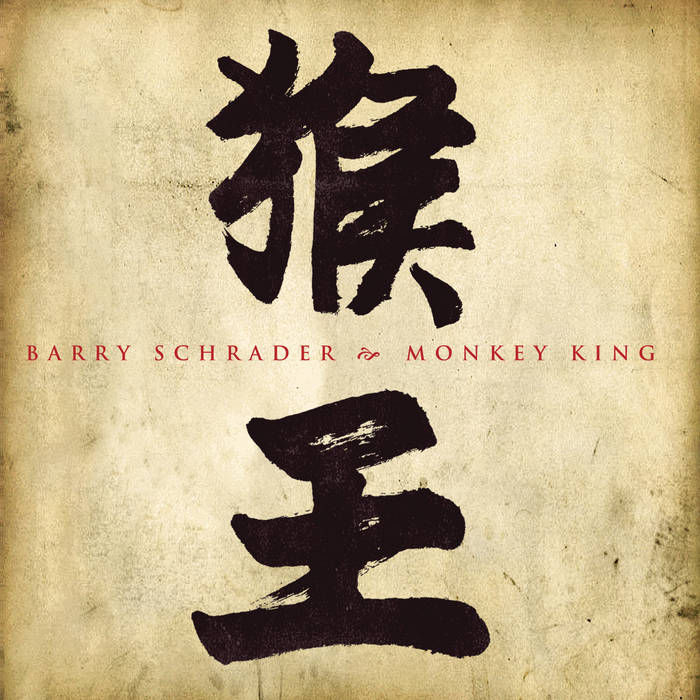 In the ancient Chinese land of Ao-lai, on the Mountain of Flowers and Fruit was a magic rock. This rock gave birth to an egg which hatched into a stone monkey. So begins one of the great classic Chinese works of literature, Journey to the West, written around 1550 by Wu Cheng-en.” With Monkey King, electronic music composer and a CalArts teacher since 1971, Barry Schrader, aurally tells the story of this intelligent animal’s birth and long journey to become a buddha. The CD’s five long tracks pulse out a veritable smorgasbord of musical challenges. Midnight drones provide a bed for all kinds of other sounds to bounce off of. Pinging shaker rhythms, cascading synth ruffles and stabs, drilling or echoey shimmers, rhythmic machine guns and static, reverb hits, gong storms, tolling bells and plenty of other drama suddenly gives way at various times to a stately stasis or a light flitting of uplifting effervescence. Then it all builds to swirling climax, occasionally interrupted by subtle touches of melody, or, alternately, hammering shimmers. Just when you start to hope the journey will never end, a sharp aluminum slash kills it all dead. If you’re a lover of minimal synth excursions, this disc will breathe new life into your listening day–whether you’re a man or a monkey.
— Arcane Candy

Hmmm...this is a very unusual album to say the least. Barry Schrader is a decidedly unconventional recording artist seemingly unconcerned with things like commercial appeal and popularity. "Monkey King" is divided into two segments. The first is entitled "Wu Xing - Cycle of Destruction." This piece explores the five ancient Chinese elements: metal, wood, earth, water, and fire. But don't expect to hear the type of Chinese music you hear in your typical Asian restaurant. This lengthy piece which lasts almost twenty minutes is a modern excursion into the world of atmospheric electronics. It's a strangely odd and hypnotic trip to be certain...and if you turn it up really loud you might just begin to hallucinate. The second segment of this album (entitled "Monkey King") centers around a fictional character in the 1550 book "Journey to the West" by Wu Cheng-en. Divided into four pieces, this 37 minute creation is a pure work of audio art.… there are plenty of unexpected surprises in the music. The track is sometimes very restrained and ambient...while at other times bursts of startling sound seem to attack the unsuspecting listener. Wildly inventive and unconventional, this album will appeal to folks who are drawn to truly strange instrumentals. Chock full of imagination and creativity. Highly recommended. (Rating: 5+++)
— Babysue

Monkey King is a colorful combination of Schrader's recognizably arousing orchestral maneuvers with an immediate melodic appeal, gentle harmonic textures, and electronic echoes of traditional Chinese instruments. While individual elements sound strangely familiar, the resulting entity is without direct reference, a style that is as timeless as it is futuristic, and which revels an ancient mythology with the tools of today. Without a single doubt, this piece is the most accessible in Schrader's oeuvre. - Tobias Fischer
— Tokafi

The CD Opens with the ‘bonus’ track “Wu Xing - Cycle of Destruction” which through seemingly simple, yet highly complex electronic sequencing, drones and textures, captures the elements of metal, wood, earth, water and fire. It presents the elements in a transcendental way by exploring them conceptually and spiritually as well as recounting their physicality. The 20 minute piece’s water section is a single data loop that is continually manipulated and the it culminates with a fire of immense energy. “Monkey King” is an electronic soundtrack to one of China’s classic works of literature, “Journey to the West”. Utilizing vast amounts of hard and soft ware Schrader closely recreates the textures, tones, harmonies and resonance of traditional Chinese instrumentation. Each section is hailed into being with the powerful crash of electronically replicated gong and manufactured plucked, bowed and hammered strings, bells, cymbals and chimes and blown bamboo are omnipresent. Conjuring readily reflections of an underworldly, spiritual landscape set within Chinese mythology it is difficult to remain cerebrally rooted in the contemporary age in which the suite was composed. “Monkey King” harmoniously coexists between modern technology and ancient mythology.” - Will F.
— Leicester Bangs

Cast as a four-part electroacoustic epic, the title track, Monkey King (2005–2007), portrays the tale of Mon- key King, a fictional character whose adventures culminate in enlightenment and designation as Buddha Victorious in Strife. The piece is based on scenes from the classic Chinese book Journey to the West written around 1550 by Wu Chen-en. Mr. Schrader’s electroacoustic re-telling sonically allegorizes Monkey King’s birth (Part 1), his underwater voyage to obtain the Staff of the Milky Way (Part 2), his unsuccessful attempt to jump off Buddha’s palm and Monkey King’s resultant imprisonment in the Wu Xing Shan mountain (Part 3), and Monkey King’s final reward and transformation into an eternal and perfect state (Part 4). This sonic journey through birth, growth, trial, and metamorphosis is expertly crafted by Mr. Schrader, who skillfully intertwines timbral, rhythmic, and harmonic material to create an enveloping, engaging soundworld. Layered rhythmic passages give way to dense sweeping textures as sounds expand and contract, developing, returning, and renewing. A slow tolling gong near the piece’s end signifies the convergence of the deities, and a shimmering texture signifies Monkey King’s enlightenment. Mr. Schrader’s masterful illustration of Monkey King’s story is satisfying musically, regardless of the listener’s familiarity with the work’s programmatic structure. - Elainie Lillios
— Computer Music Journal